Parallels Desktop 16 brings about a revolutionary change with their picture in picture view which shows the Windows of other virtual machines on top even though one may have a Mac app open in full screen. Easy switching between virtual machines lets you simultaneously monitor multiple operating systems on one screen without having to switch-in and out. This one of a kind feature lets you customize settings such as Window mode, Full-Screen mode or Coherence. In coherence mode, Windows becomes invisible while working with any Windows app in Mac. 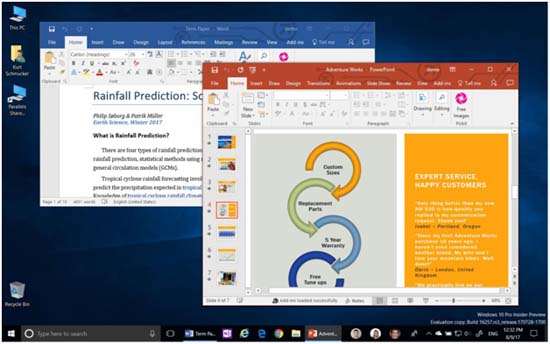 A host of other useful features includes do not disturb, do not sleep and the lock screen each having its own individual functions. The lock screen mode immediately locks your screen, preventing any unauthorized use. The application makes sure your display lights don’t dim when idle by preventing your computer from going to sleep, so you can work uninterrupted. The do not disturb is another welcome addition to the Parallels Desktop 16 software.

Once active, it makes sure there are no notifications or application animations in the background while you are performing an important task. The hide desktop hides all your files, folders and icons on the desktop during a presentation or while taking screenshots. All these tools mentioned above are designed for professionals and students alike as doing a presentation on your PC is a serious task which requires your undivided attention. The hide feature makes sure nothing untoward pops up while you are making a presentation at the office or university.

The Parallels Desktop 16 has come a long way from its previous version launched a year back. While the 15th version of the very popular cross platform software packed quite a lot of features, the new version is faster, provides more fancy features and comes with a lot more improvement in overall performance. The picture in picture feature is an added bonus unavailable with the 15th version. Moreover, the 16th version one can now add a whole list of Windows applications to the touch bar unlike its predecessor, which allowed only Outlook and recent documents on the Mac touch bar.

The integration between two different platforms is now absolutely seamless and performance has received a much-required boost. While the 15th version was the best in its class at that time, the Parallels Desktop 16 has come a long way by fine tuning the small glitches that bogged down previous versions and improving the overall performance of the software by leaps and bounds. Greater emphasis on speed and simplicity with most of its applications being done with only a mouse click have helped cement its place as the best in business.

Ease of use is of utmost importance as well as the visual and functional improvement of the product. The new version is faster, sleeker, looks better and does more than its predecessor. Let’s take a look at the important changes.

Pros and Cons of Parallels Desktop 16 for Mac

– Documentation is not adequate for first-timers

VMware Workstation 16 Vs VirtualBOX: Which Virtualization Platform You Should Go For?